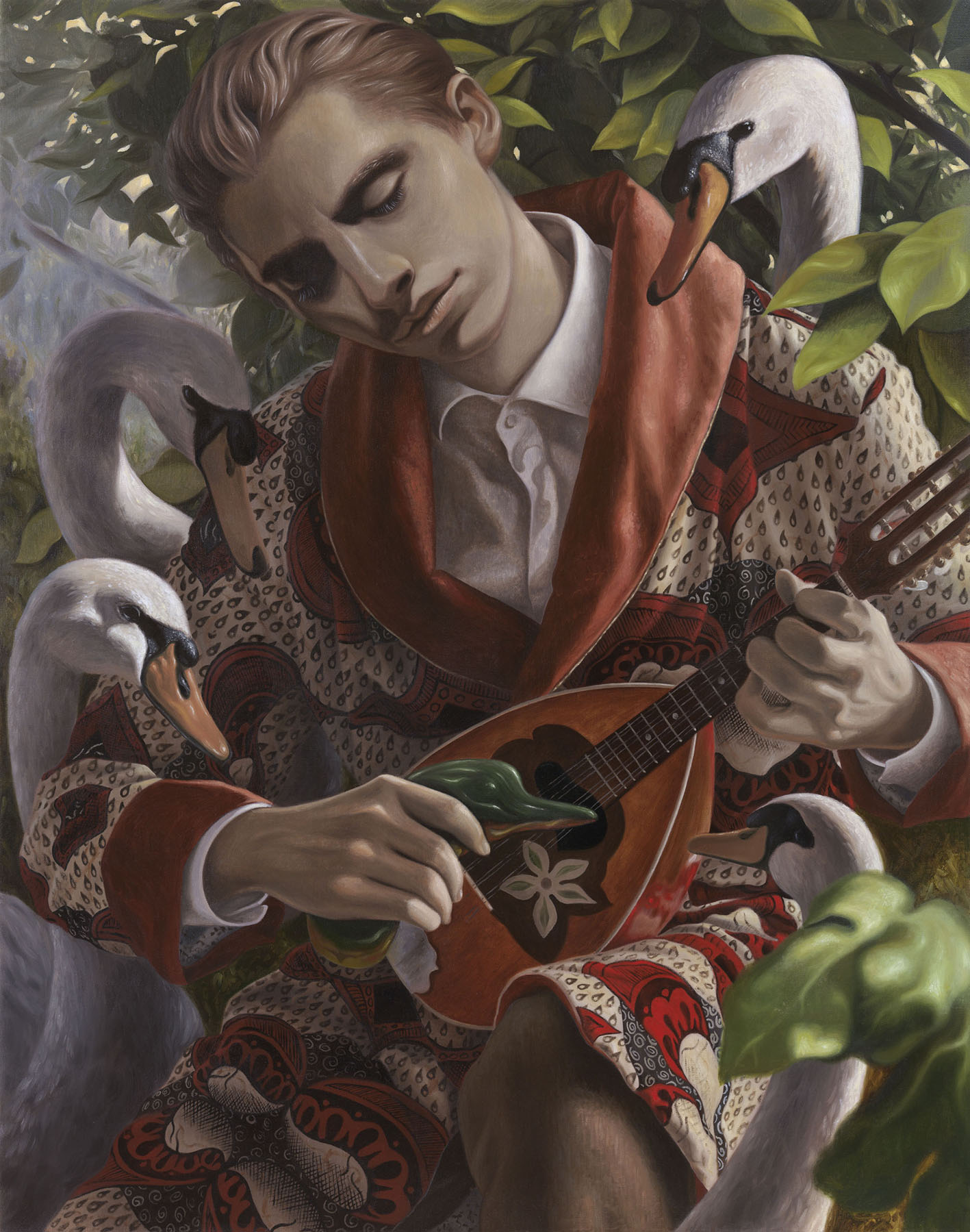 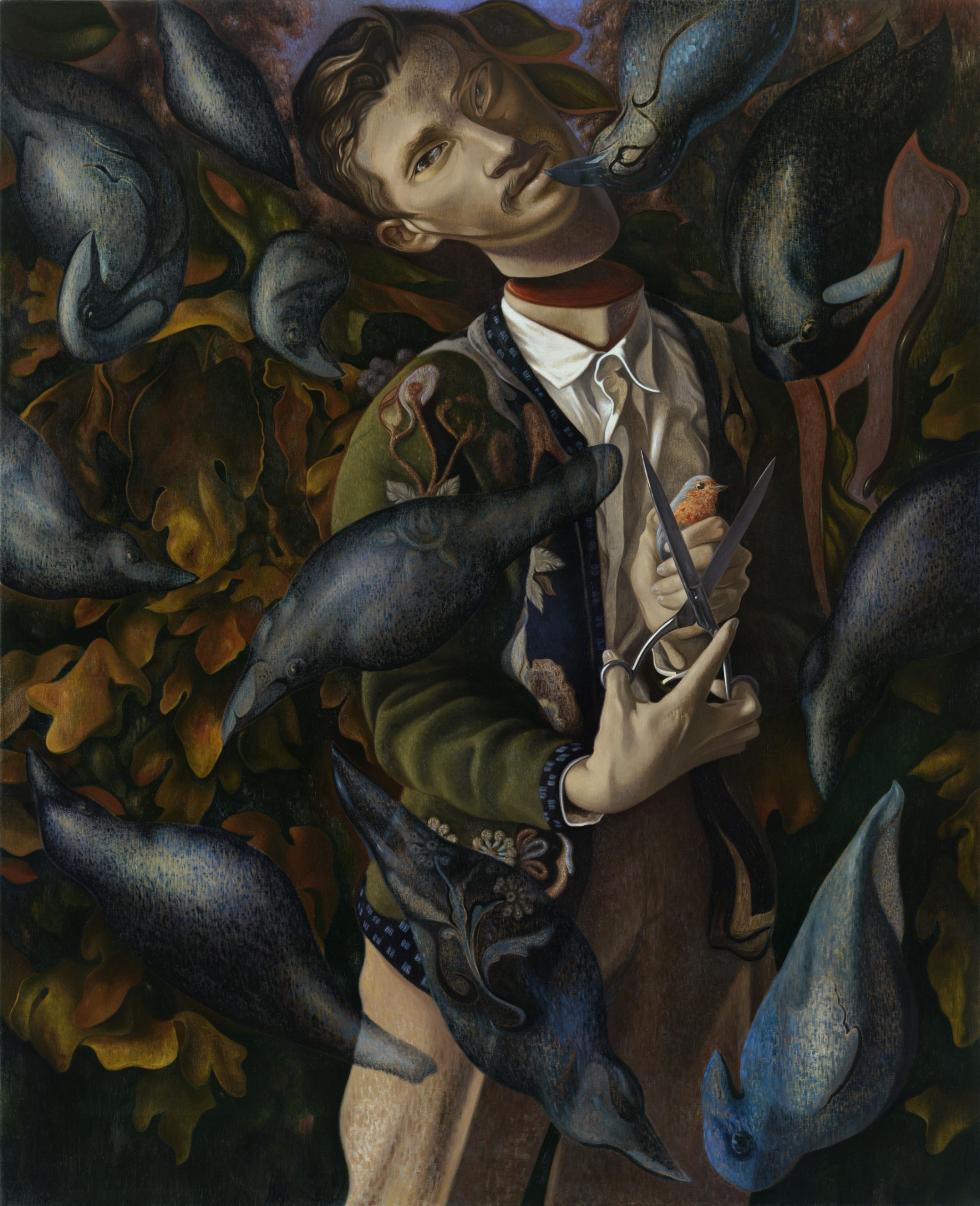 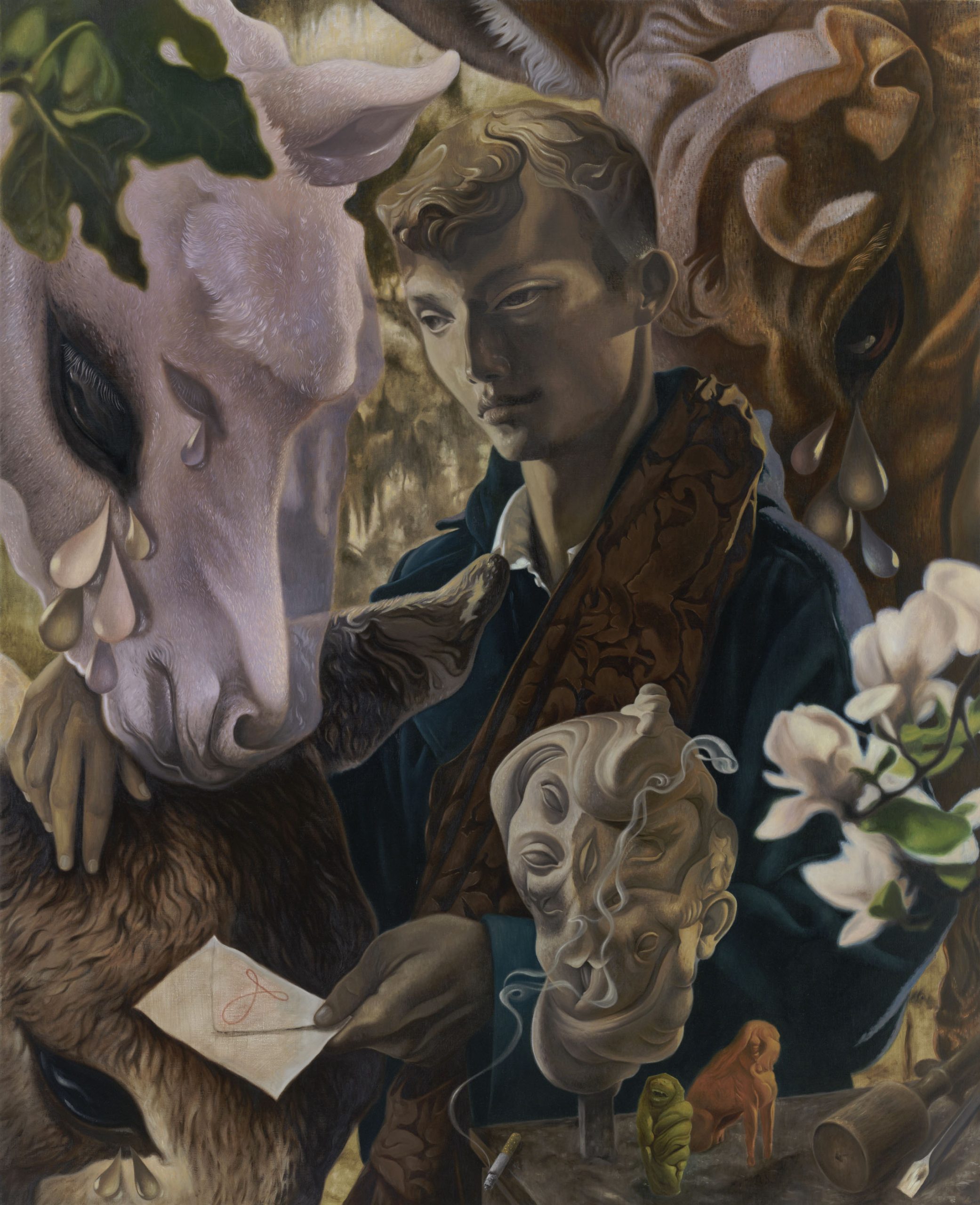 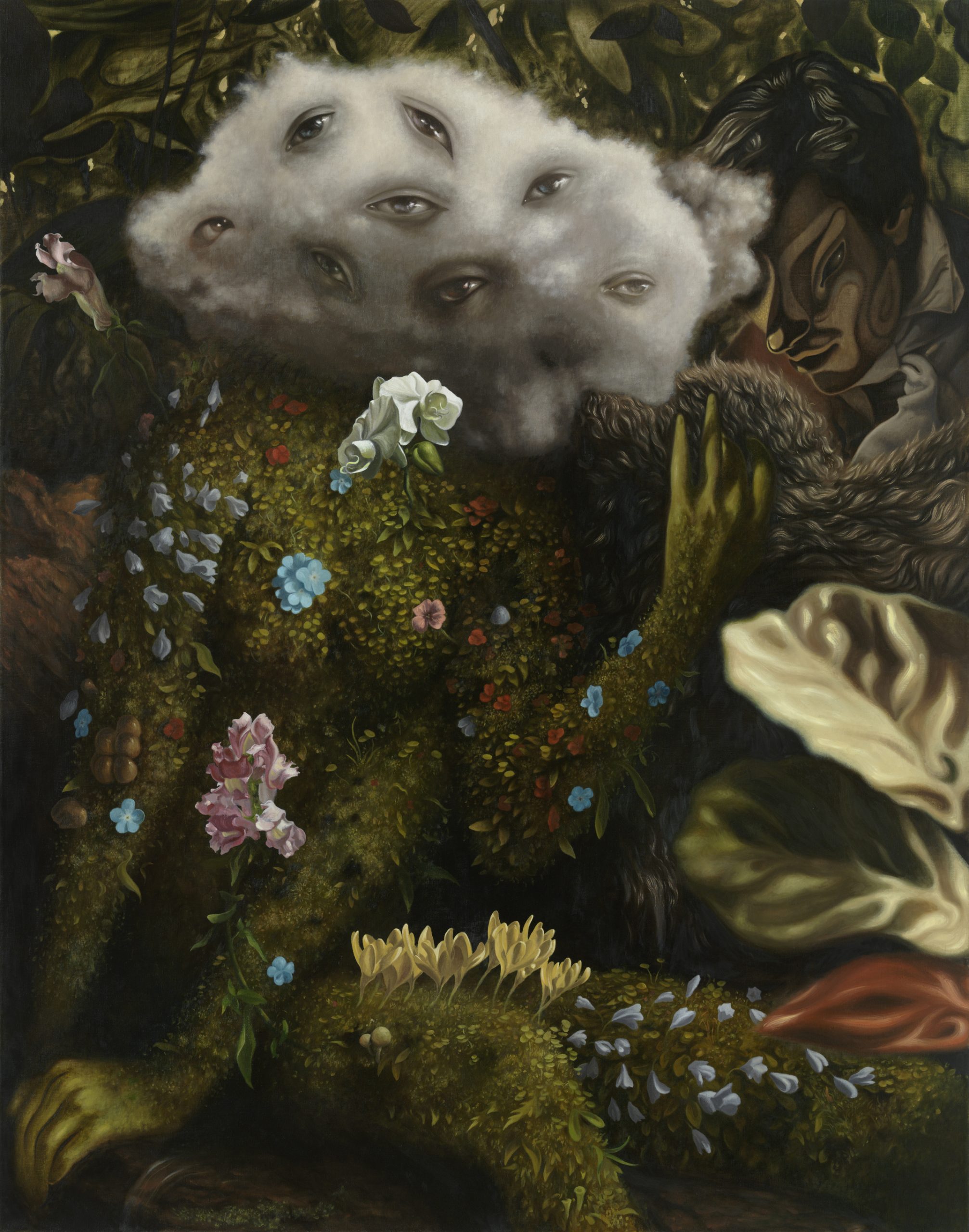 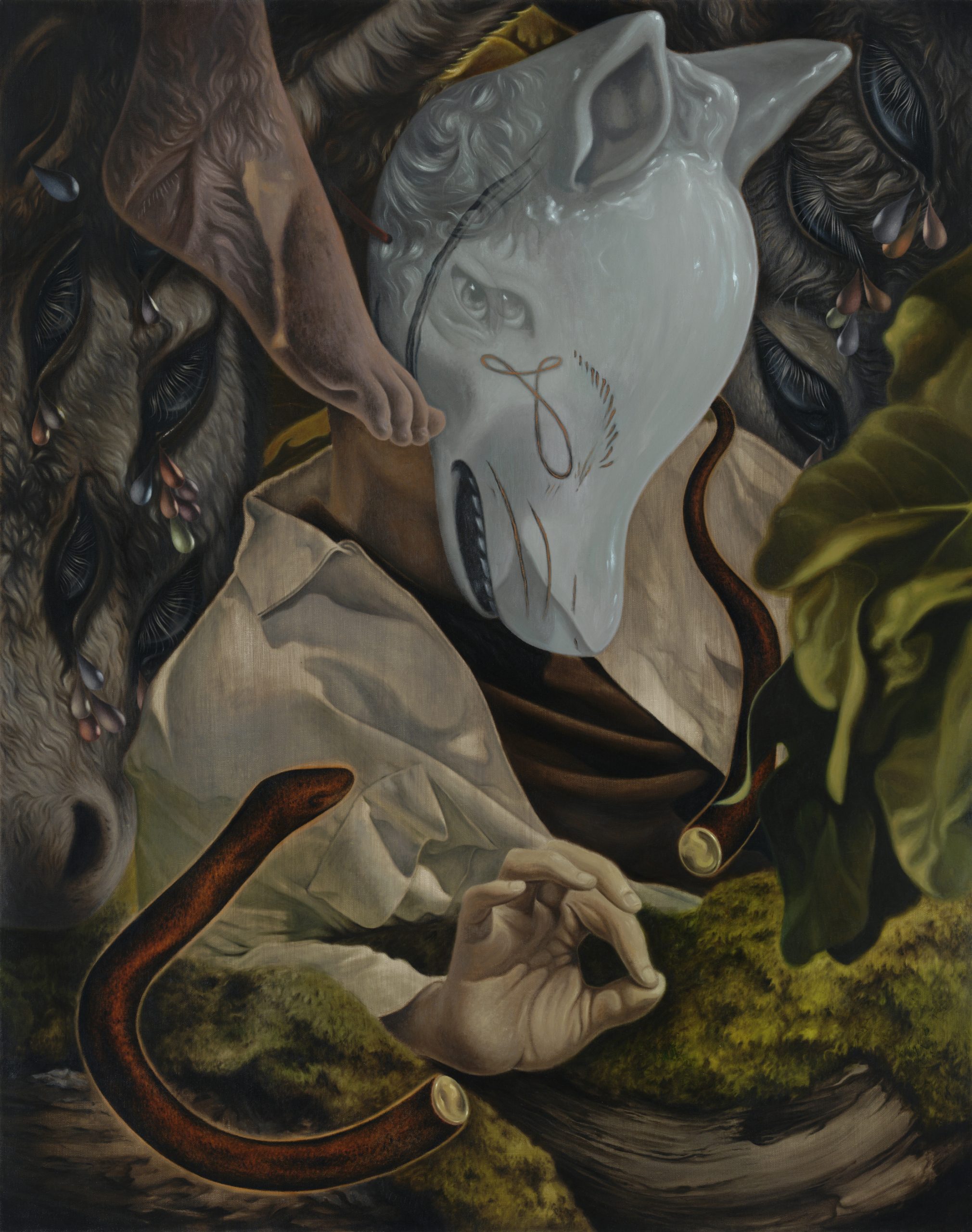 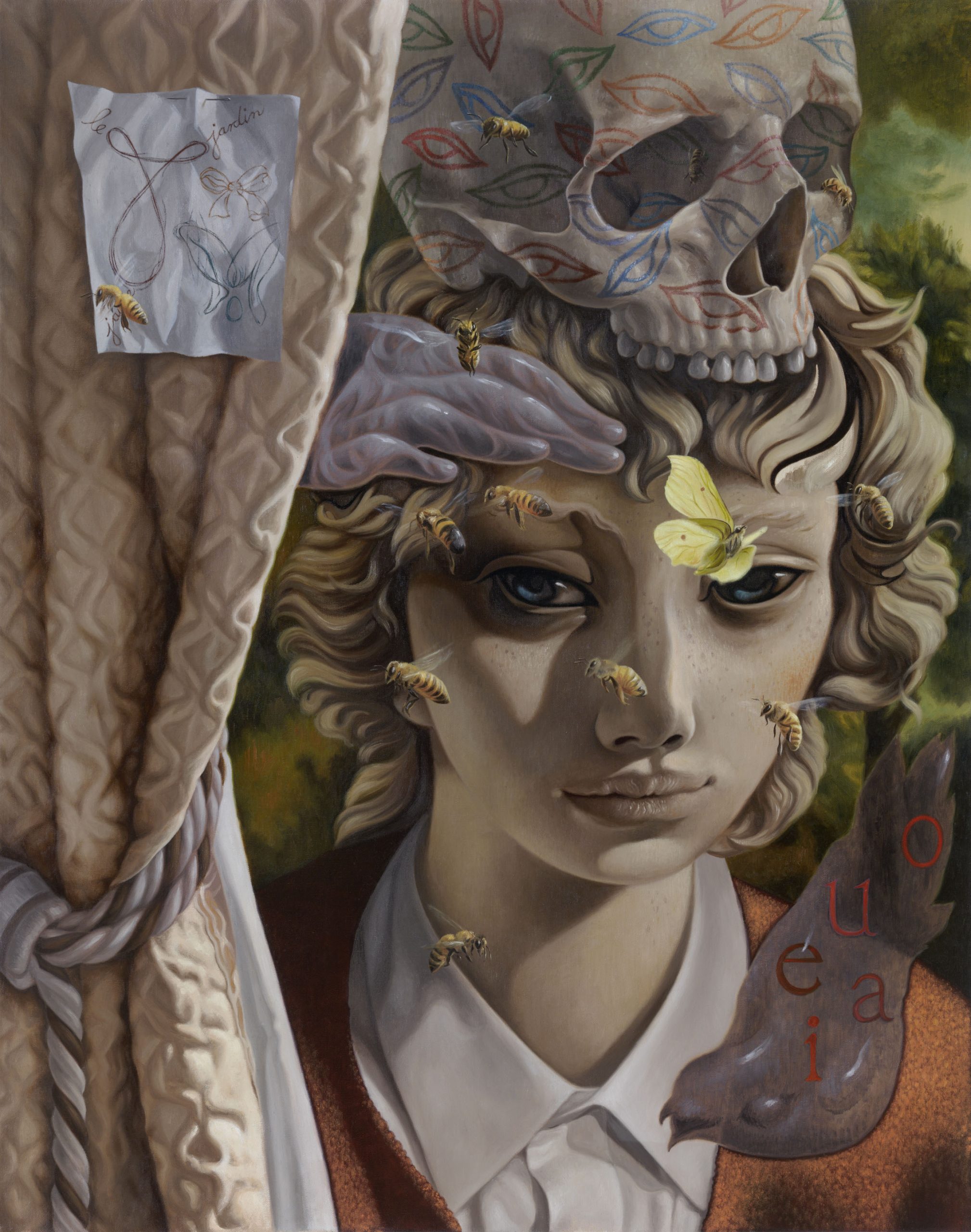 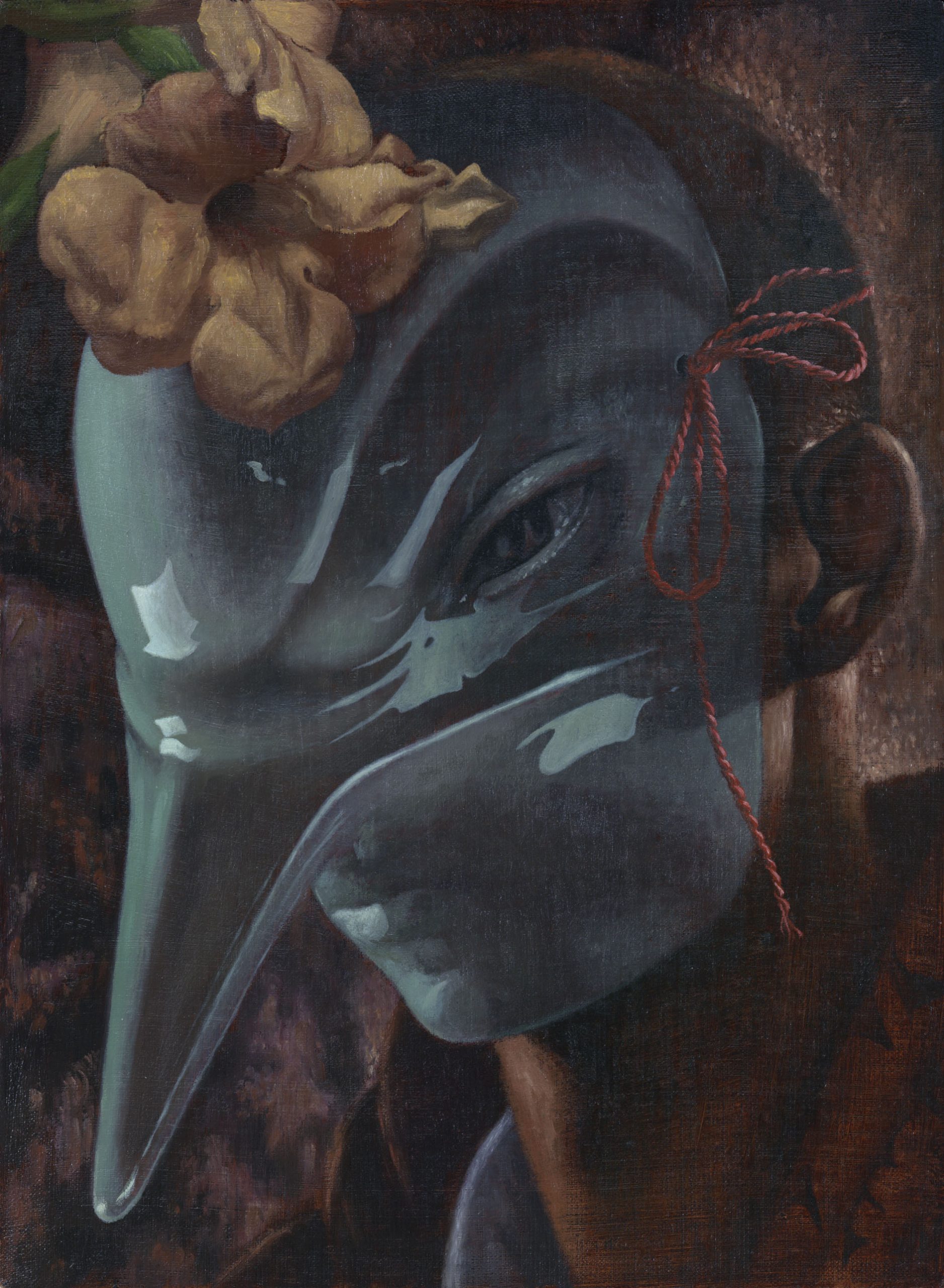 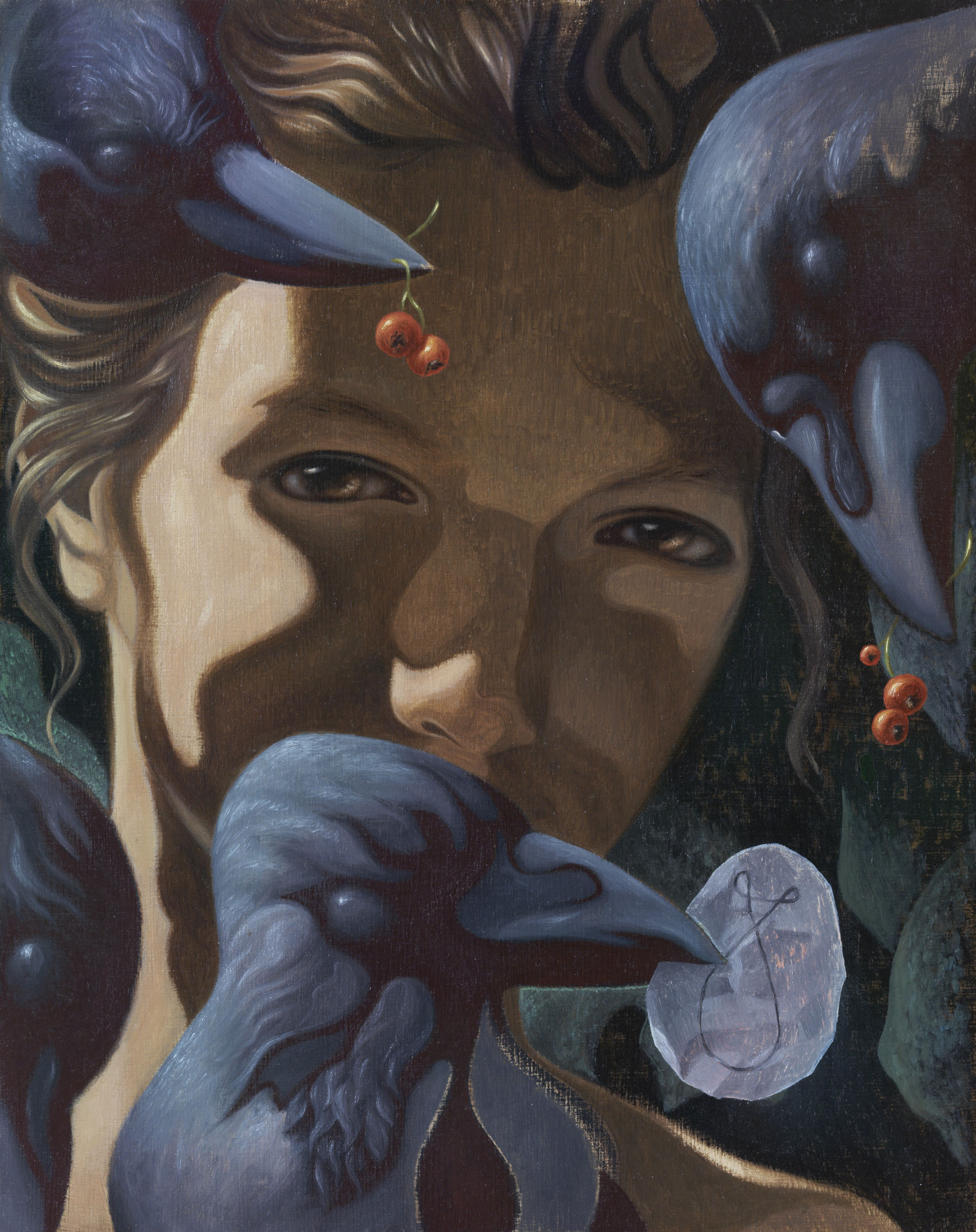 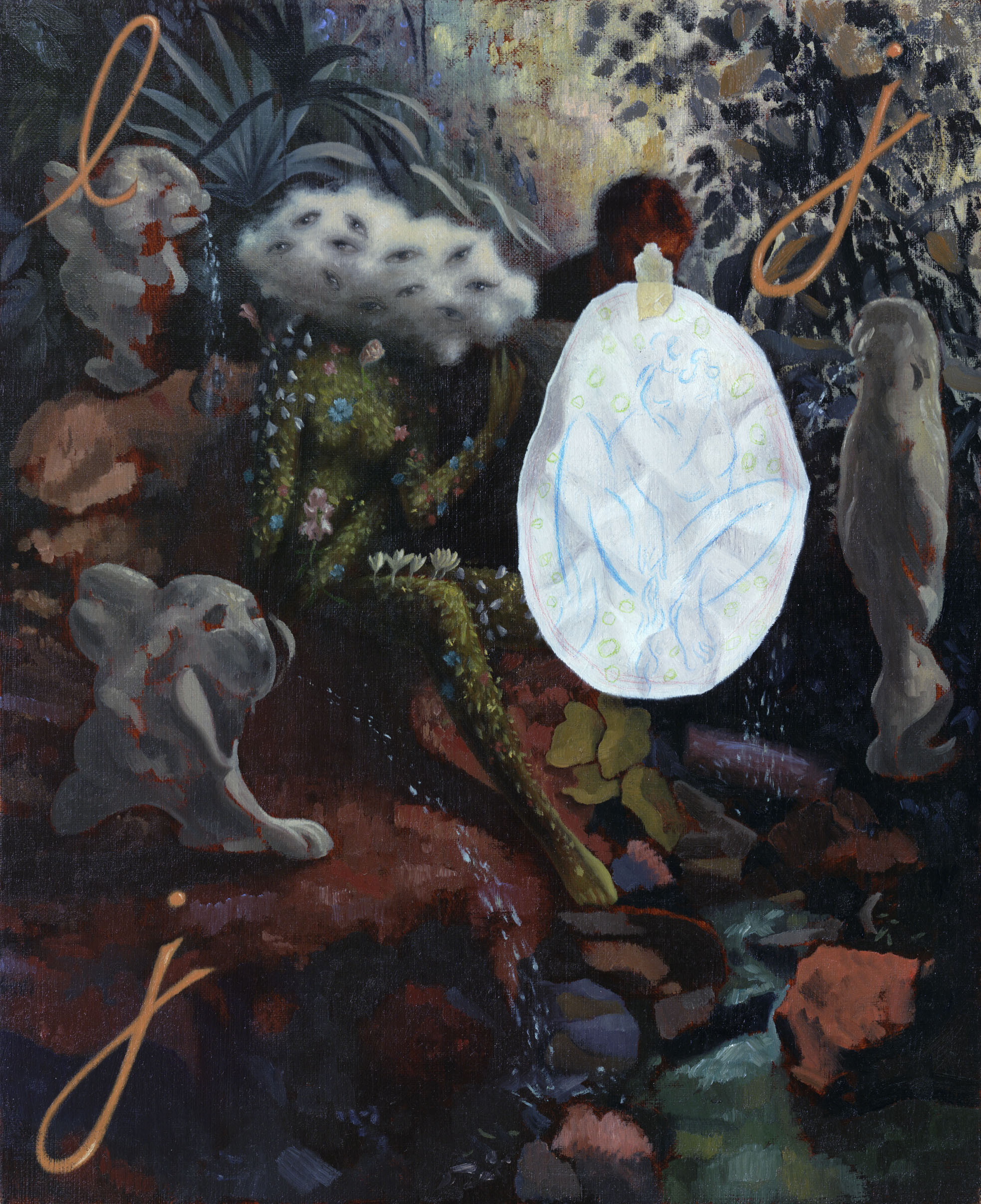 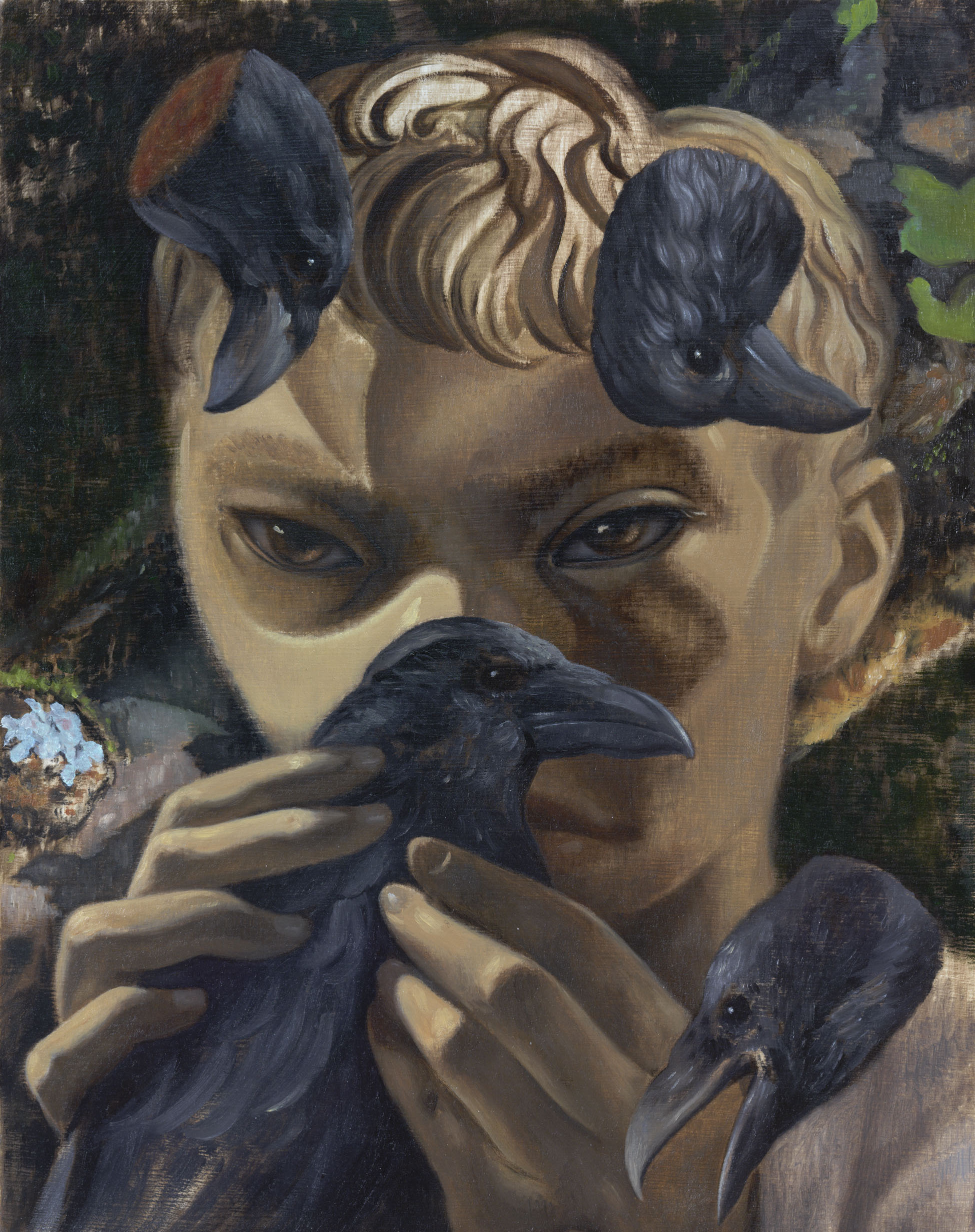 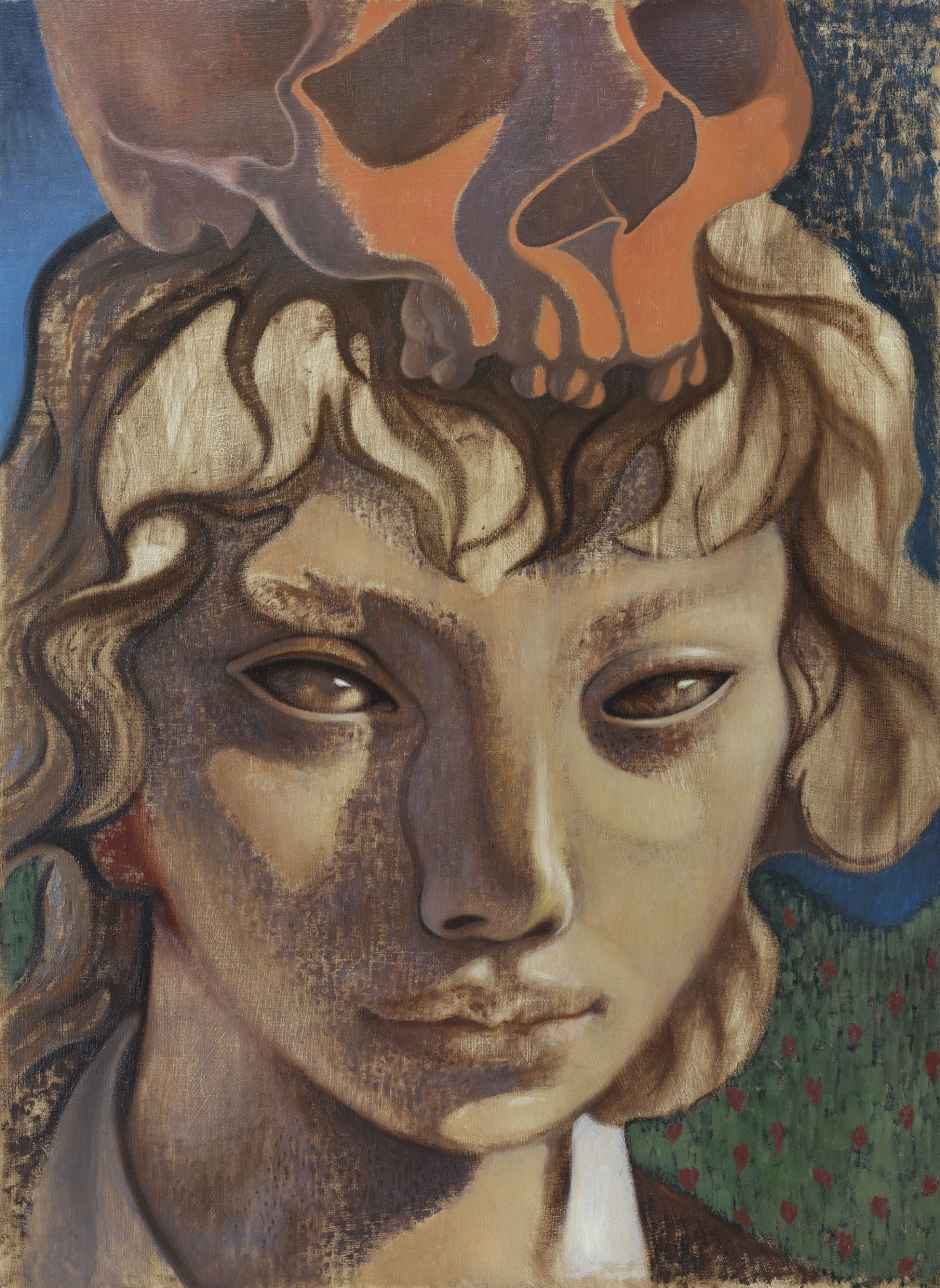 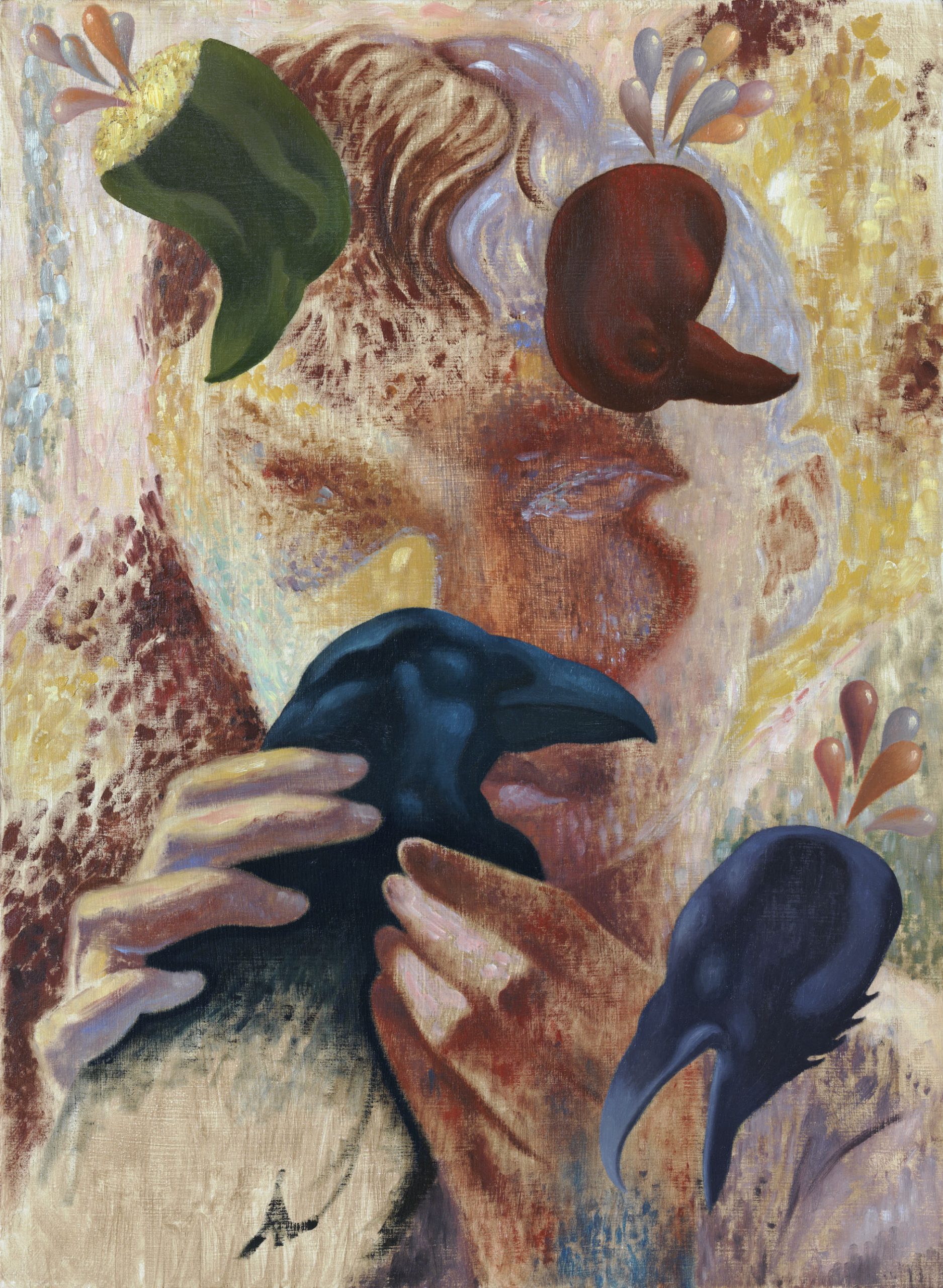 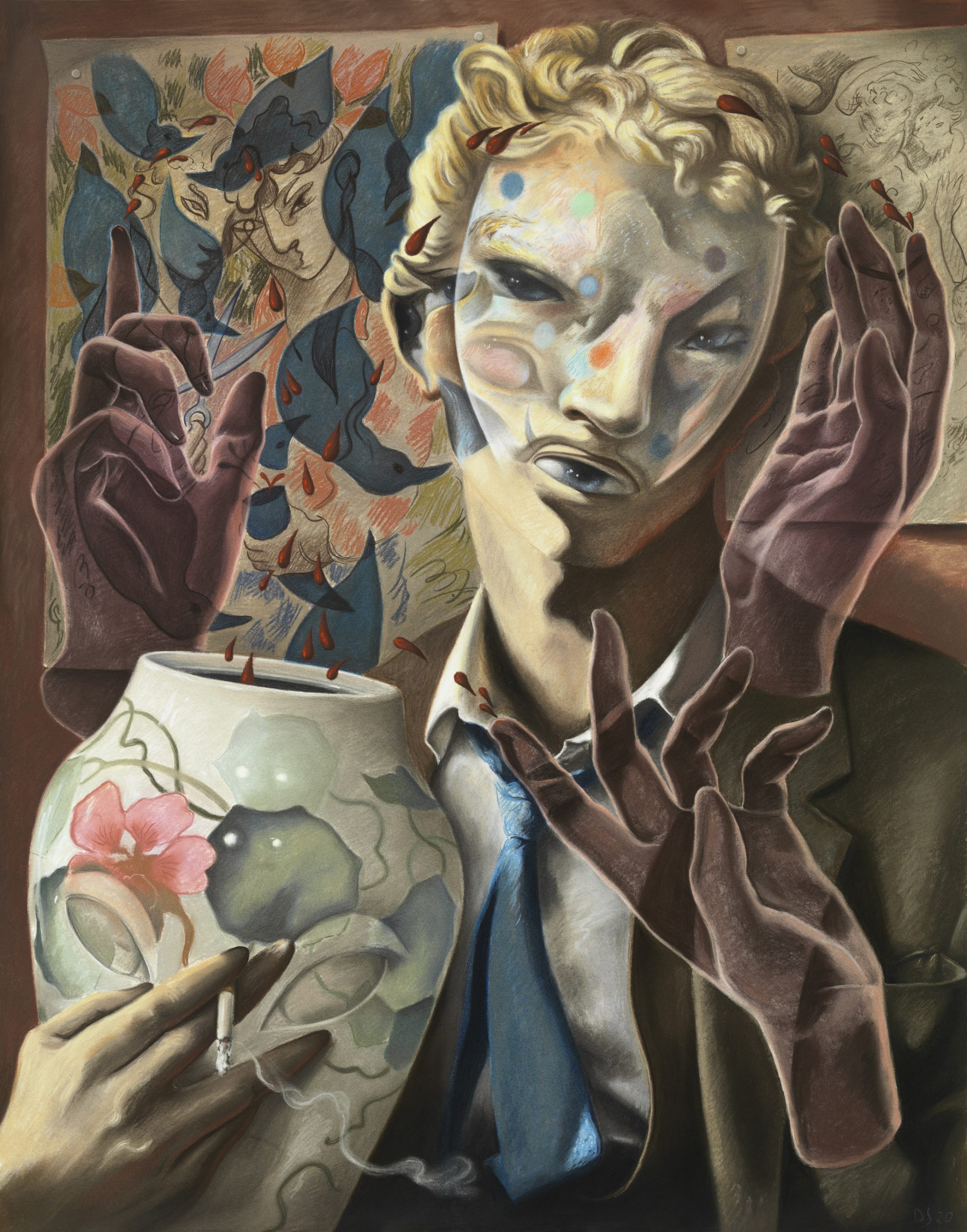 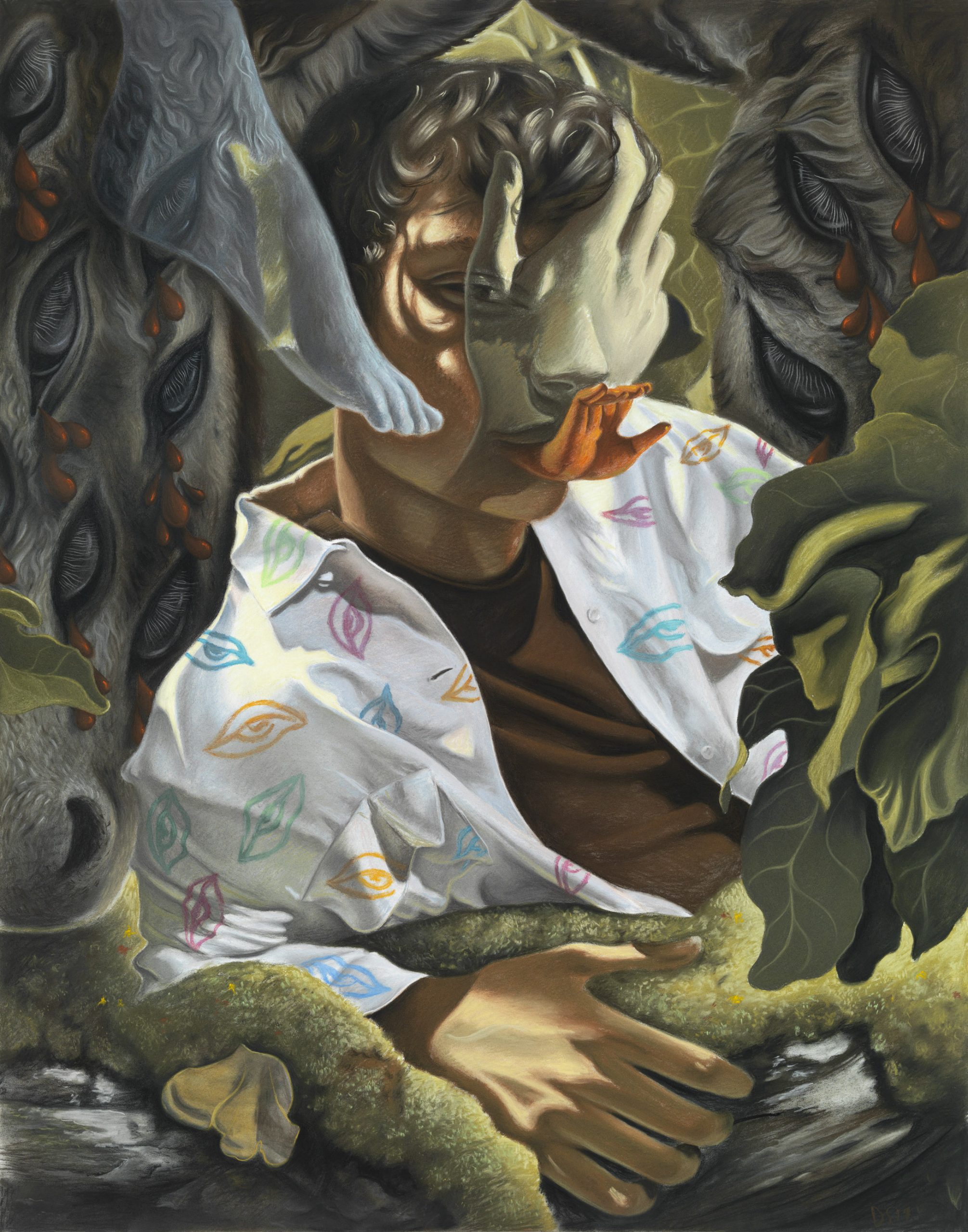 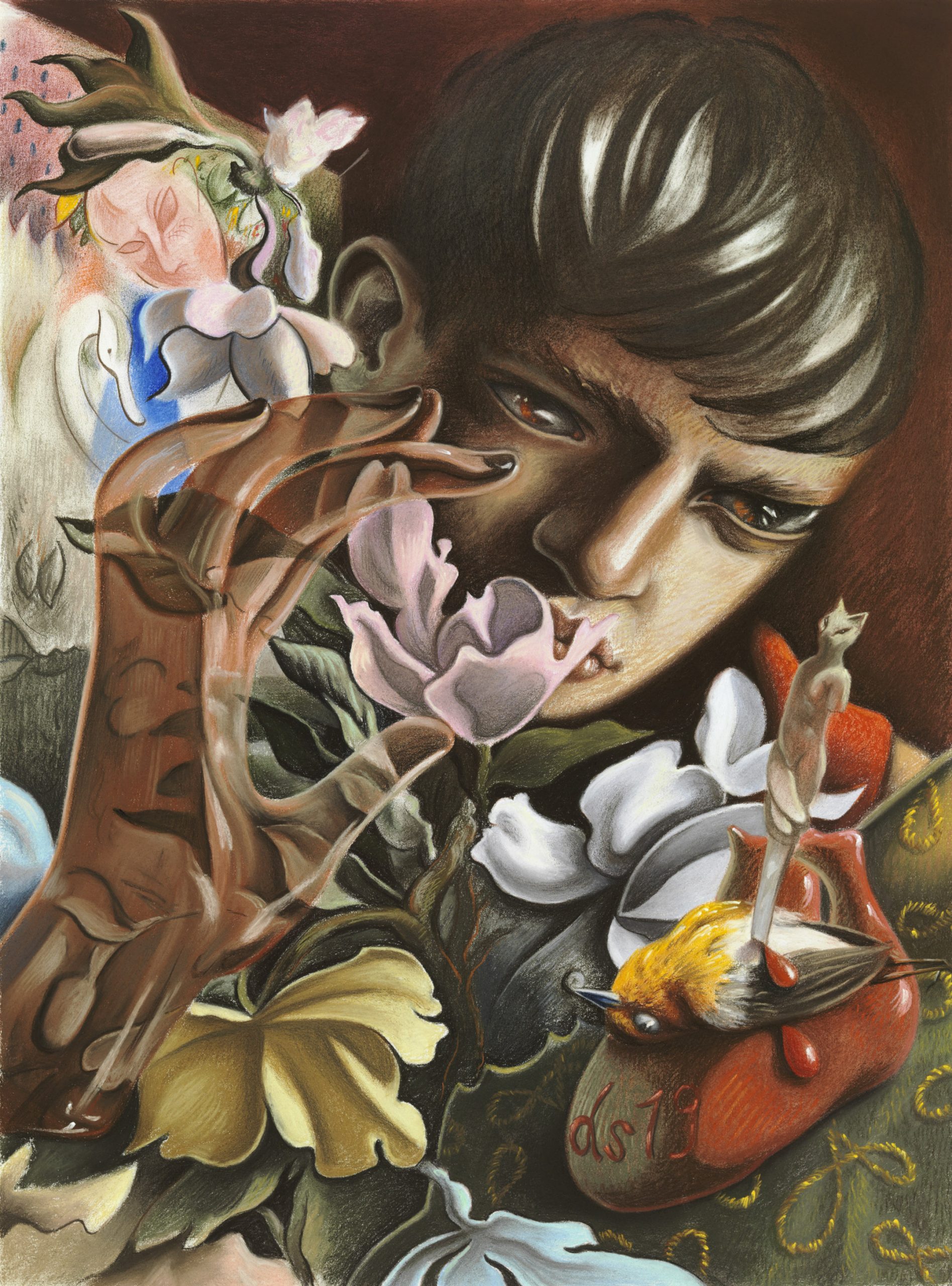 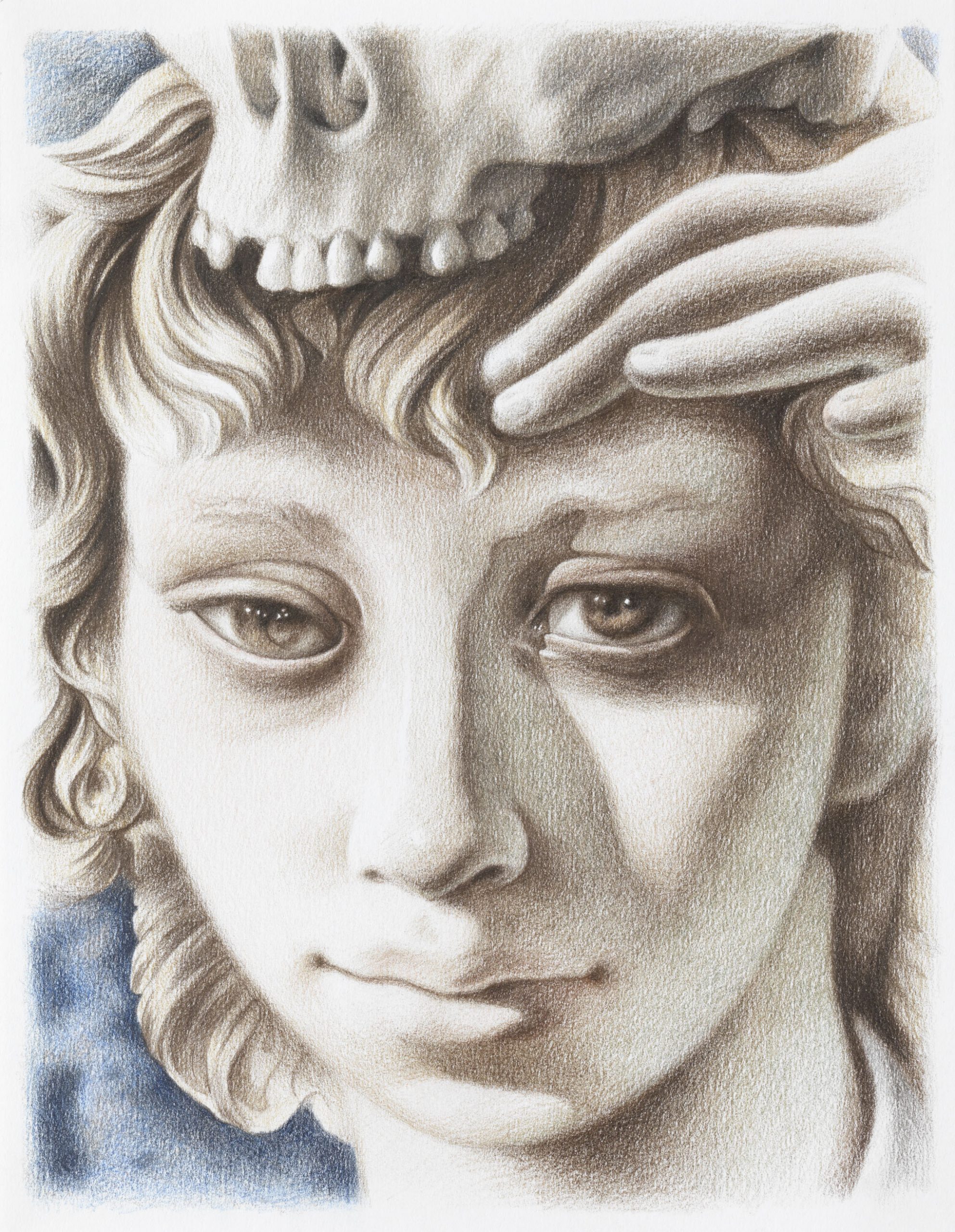 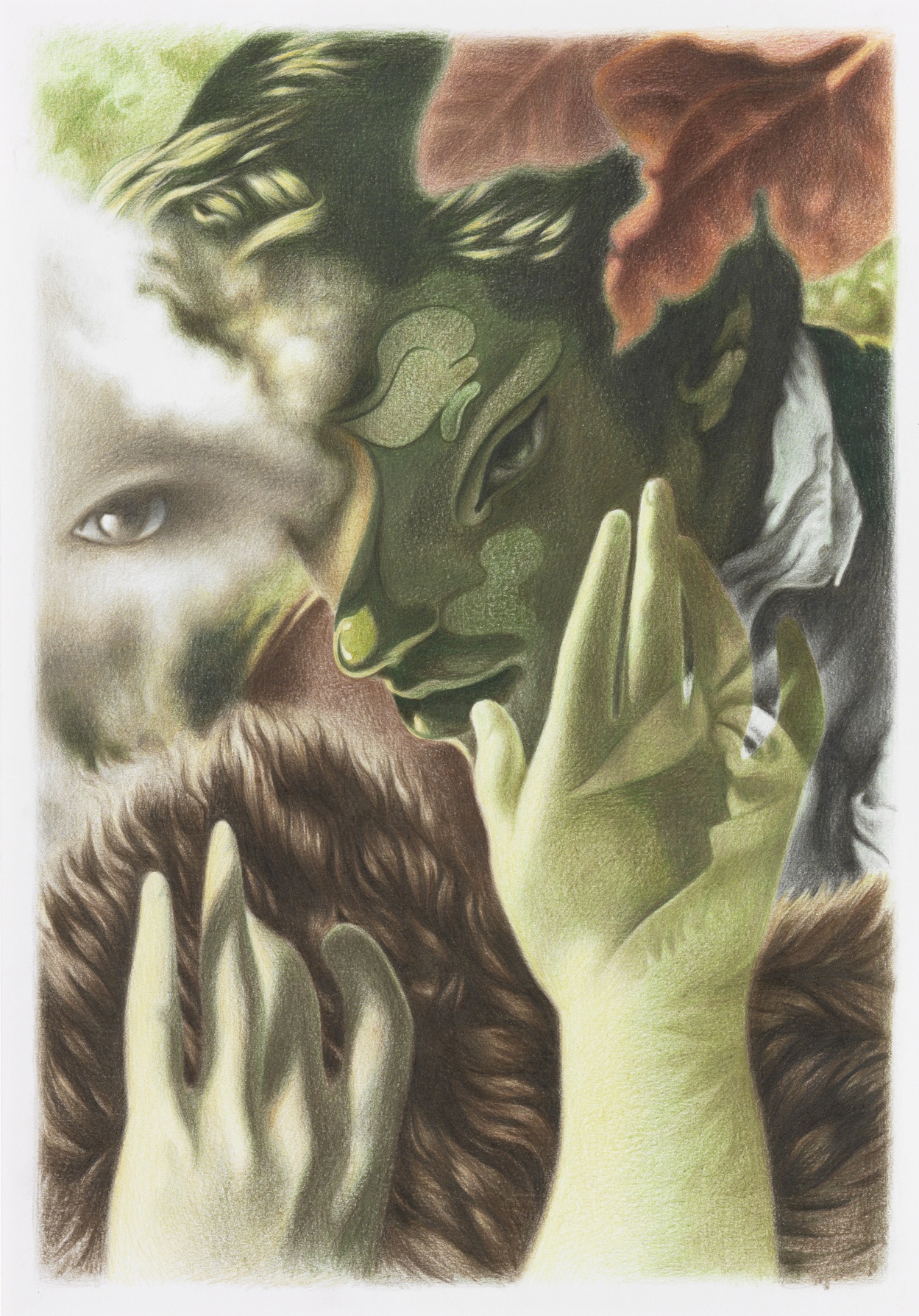 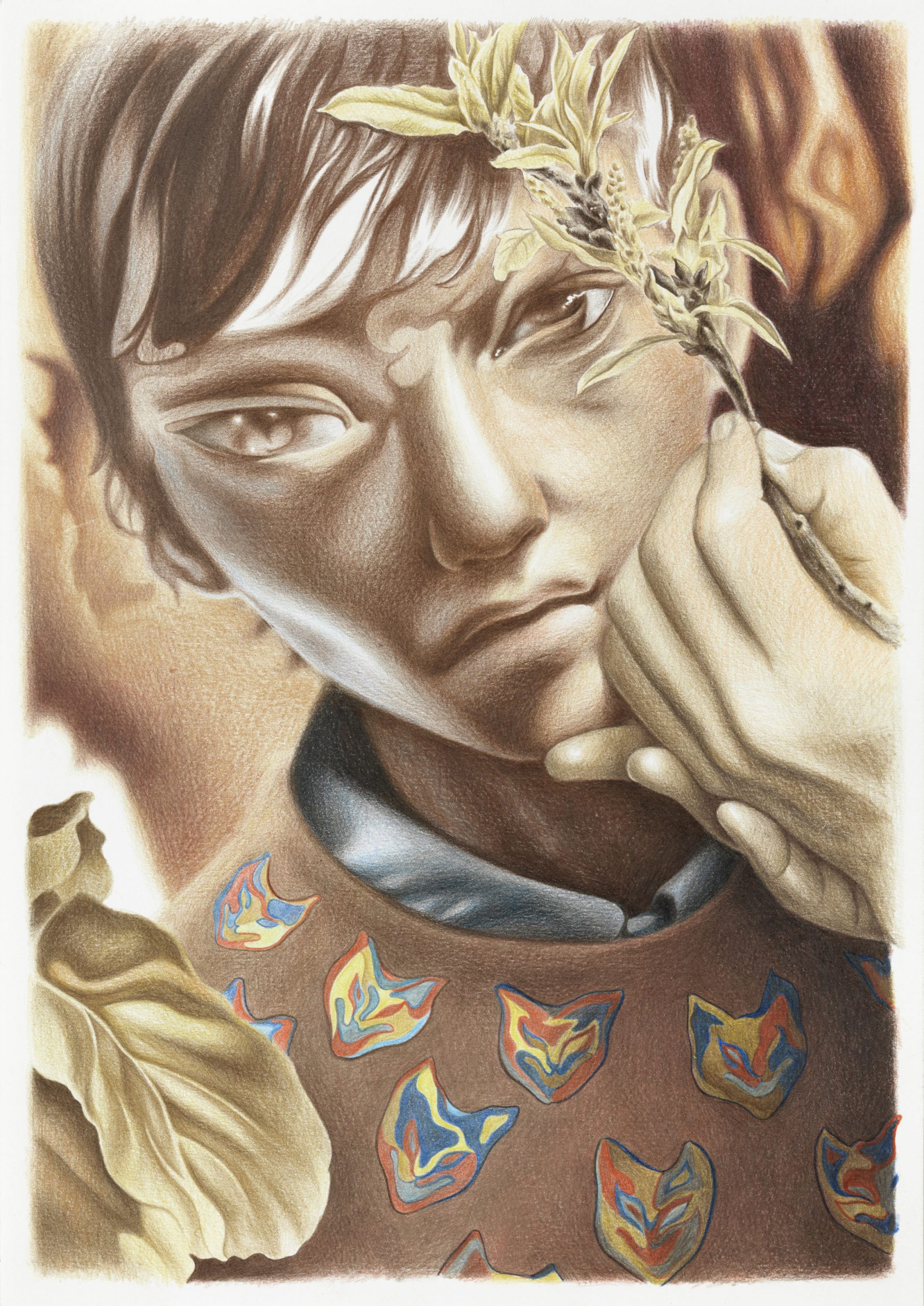 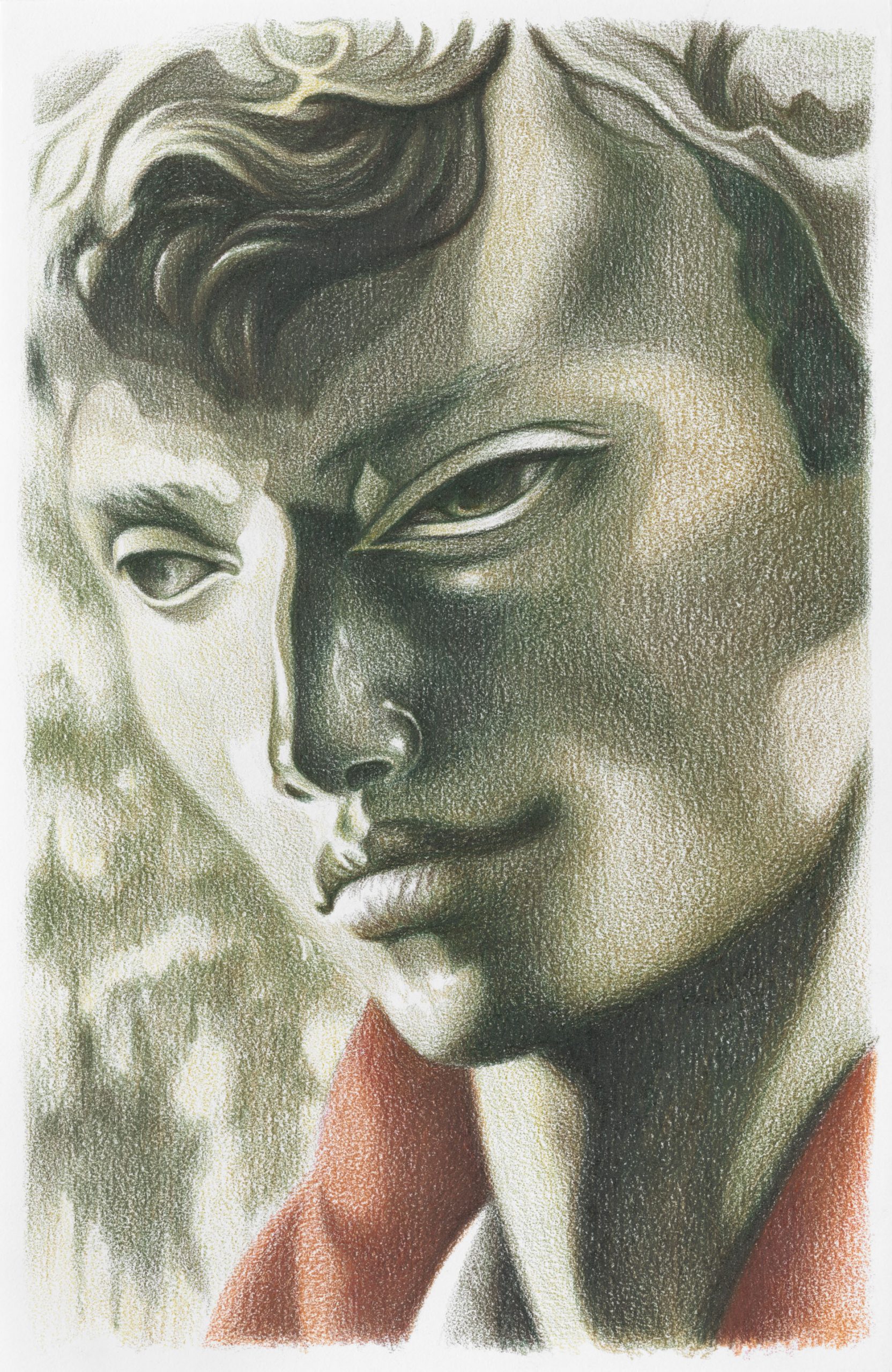 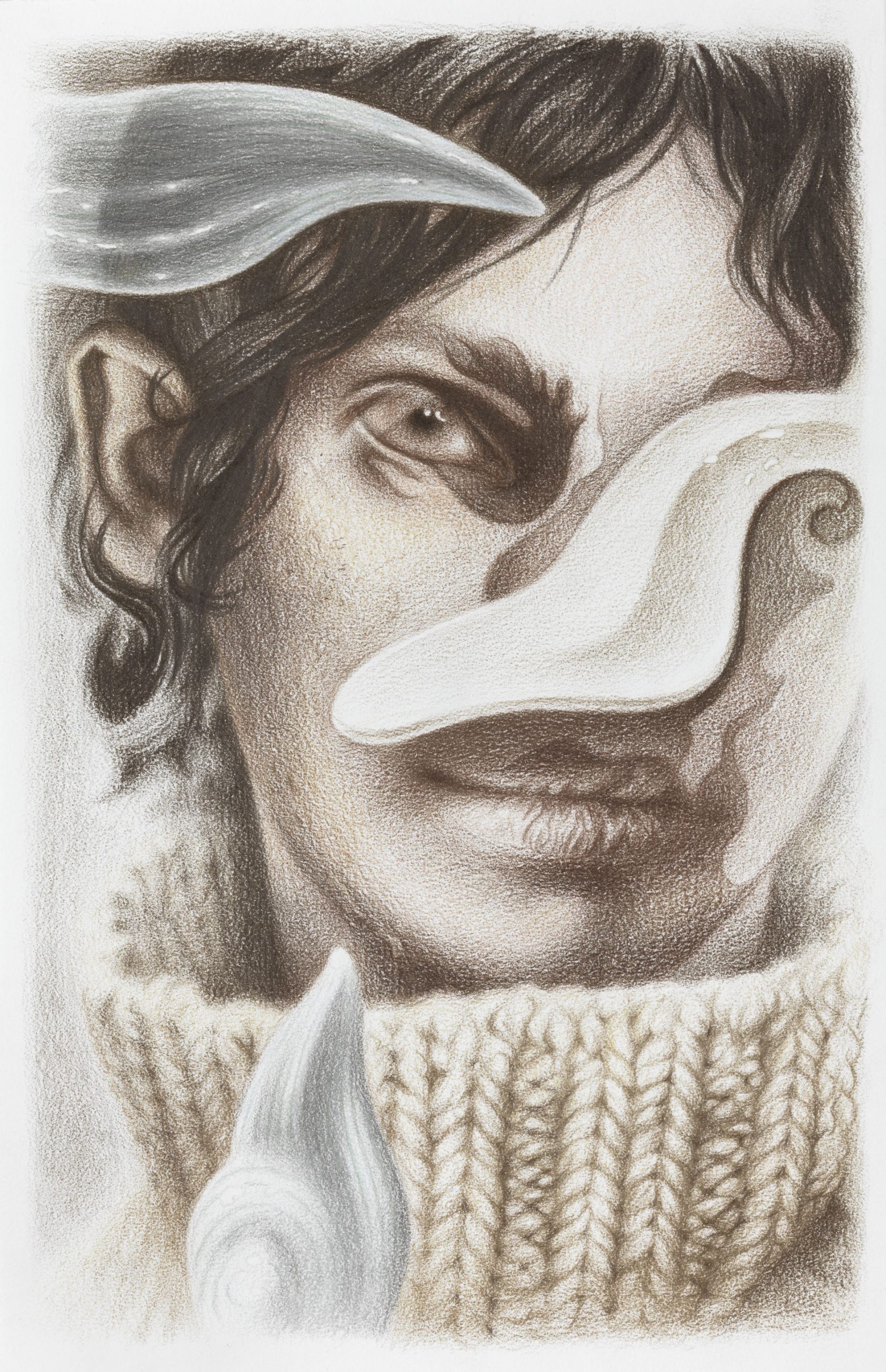 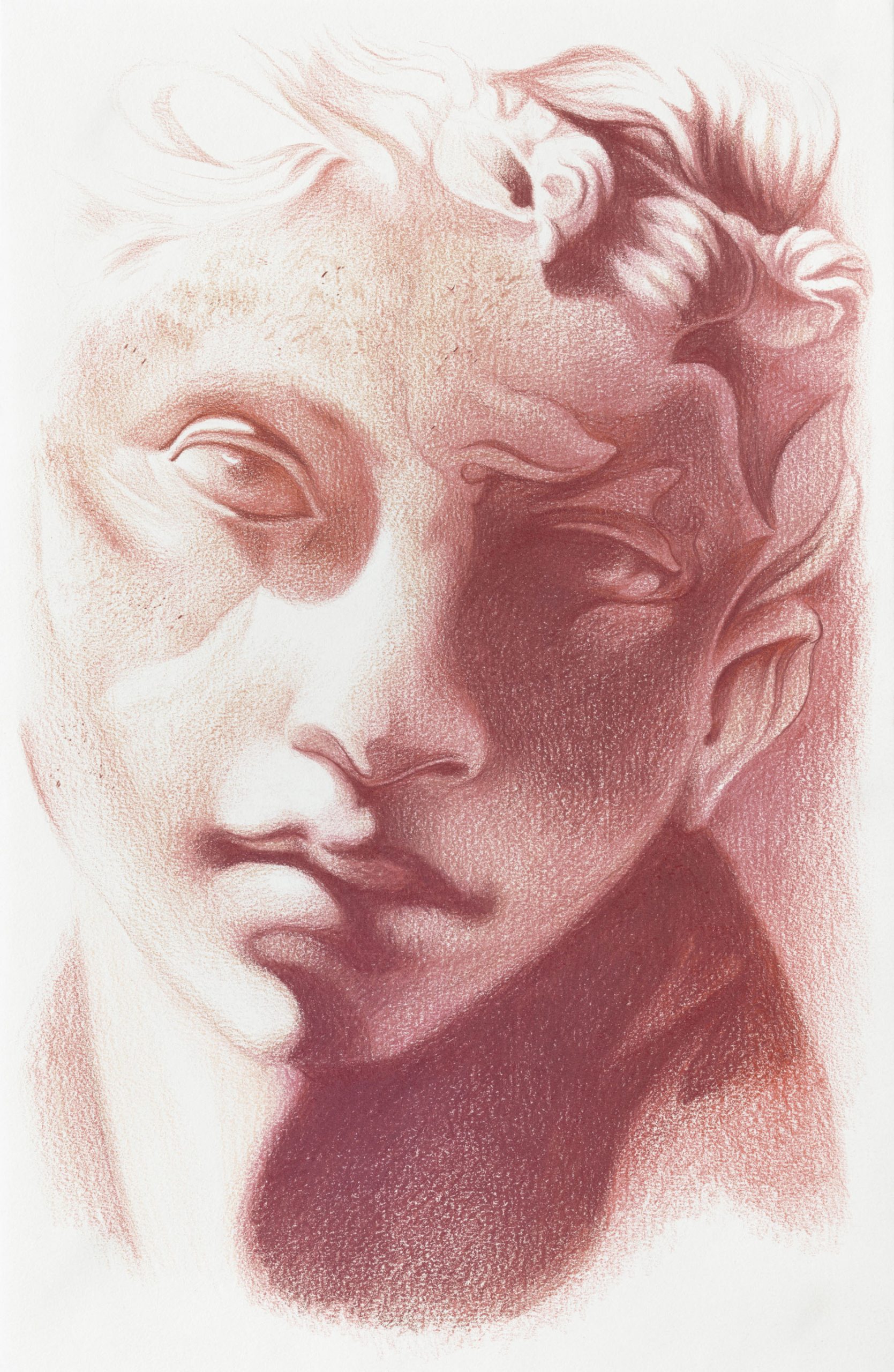 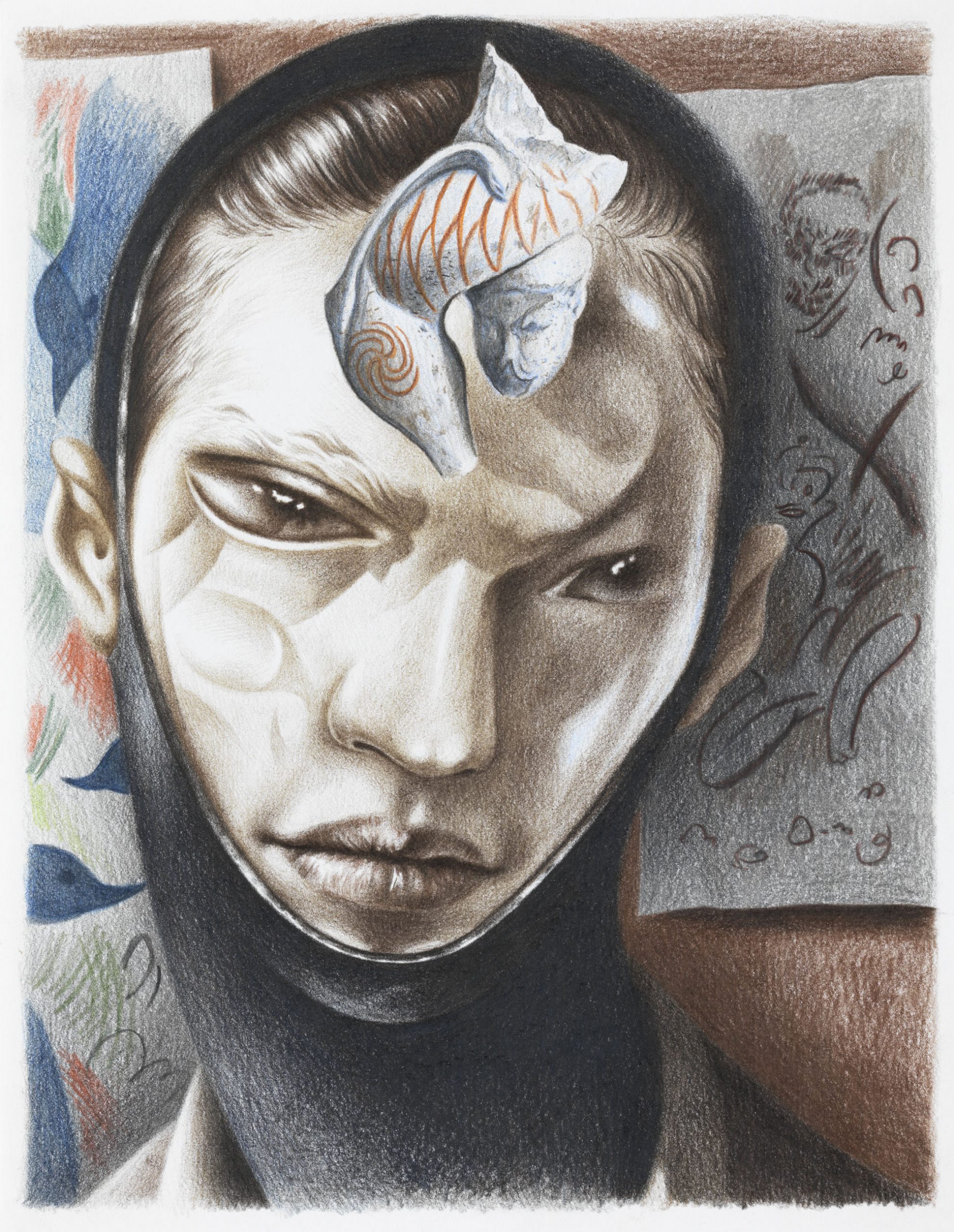 DSC is delighted to present the arresting and thought-provoking exhibition From Arcadia to Dystopia which brings together works by the German artist, Dennis Scholl and Czech artist, Adam Stech. Though both are strongly narrative and influenced by Freudian and Lacanian psychoanalysis – and by the Modernist movements of the early 20th Century – their practices are distinctly different. Seen together, Scholl and Stech’s works create a strong dynamic and counterpoint for the other’s perspective.Scholl produces meticulously executed drawings and paintings of figures nestling in contexts that evoke the classical visions of Arcadia. A master of line and an acute observer of the most minutiae of detail, Scholl’s dreamy visions recall German Romanticism – notably the works of Philipp Otto Runge, the mystical works of William Blake and the strange scenes of Henri Fusili.  Additionally, Scholl is drawn to the richness and excessive opulence of the Baroque, laced with the darker edge of vanitas and the sometimes brutal depictions of ‘still life’ by artists such as Chardin.While art history is clearly important for Scholl, his figures also engage with the very contemporary interest in androgyny and the breaking down of distinctions between men and women. Many of Scholl’s protagonists could be both male and female – indeed he seems to enjoy the ambiguity surrounding their gender and invites the viewer to consider his subjects from a more fluid perspective. At times their faces resemble masks and also intimate they are derived from the marble busts of the Classical world.

There is an emphasis on limpid almond eyes, full, sensuous lips and hair that looks sculpted from clay or stone. The narrative nature of Scholl’s work and the fine way he executes his paintings and drawings with a controlled but deliberate hand, is also reminiscent of Balthus – particularly in terms of some of the strange, dream-like and staged domestic interiors he employs to great effect.

In contrast, to Scholl’s gentle, even vulnerable-looking figures, Stech’s protagonists appear strong, even defiant. Like Scholl he is clearly curious about the psychology of his sitters – whether derived from reality or his imagination, but he uses irony, dark humour and injects a certain amount of brutality into a number of his works, particularly in his paintings.

There is a strong connection to Analogue Cubism in Stech’s practice in terms of his use of fragmentation and distortion. This might be taken at face value, but it could also be interpreted as engaging with the fractured, even tortured nature of the self. Like Scholl, Stech has chosen to re-awaken the interrupted conversations of Modernism. The inter-war artists of the 20th Century were experimental and diverse in terms of their techniques and materials and Stech follows their example, gliding easily between painting, stencils and mosaics, choosing the medium most appropriate to his subjects and the narratives that encase them.

We can also feel something of Art Brut in Stech’s work and a strongly political element to his practice. There is an ironic, dark humour that laces through his subject matter that we find in the Czech authors like Milan Kundera – who was at times occupied by de mystifying the myths of Marxism and Leninism and examining the legacy of Communism from afar (in Paris). In Stech’s case, he employs a different approach: like Kundera and Havel, he reflects on the past and specifically the Czech political past, but he also engages with the fractured nature of the present – both in terms of politics but also in terms of considering the challenges of the contemporary world for the individual and the modern family.

Both Stech and Scholl use figurative painting that focuses on the portrait or the depiction of the face/figure as a site for exploration and for projecting emotion. Scholl delves into dream-like fantasies which might be undergirded by darker thoughts and passions but nonetheless are handled in a sensitive and delicate manner, whereas Stech is more forthright and confrontational and some of his scenarios feel decidedly dystopian or even brutal. All this said, a number of Stech’s portraits are also concerned with capturing the essence of the subject and in these examples, are often both sensitive and tender in their rendering.

Over the past twenty years, it has become increasingly clear that European artists are interested in investigating the work begun by the Modernist artists of the early 20th Century that was sadly interrupted by two devastating World Wars and politically opposed ideologies. A hundred years on, artists such as Scholl and Stech appear to be picking up the baton from the giants of Modernism and continuing their conversations.

Conversely, there is nothing anachronistic or outmoded about Scholl and Stech’s practices – both artists are deliberately current – and presenting their views through the lens of the 21st Century at a time of an unprecedented global pandemic. We are living through a moment that feels surreal and bizarre. We ourselves have moved from Arcadia to Dystopia, and now more than ever, we are turning to art and literature to provide us with a window of escape from our earthly concerns and a different perspective.